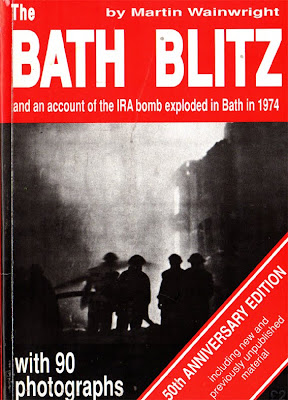 Did you know that the most beautiful city in England, Bath, was bombed in the Second World War?
Very badly bombed. Four hundred and seventeen people were killed and whole streets of Georgian houses were destroyed, never to be rebuilt.
I had no idea that this was the case when I started work as a trainee reporter in 1972 on the Bath & Wilts Evening Chronicle, as it then was (now it's a chunky weekly, called the Bath Chronicle). I only came across the extraordinary story when I went to to interview unemployed people at the benefits office in Milk Street, and wondered why the building was a single-storey stump with shrapnel marks spattered across its front. 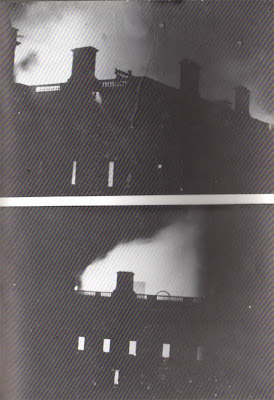 Bath's famous Assembly Rooms in flames. These Chronicle staff photographs were taken on the first night, developed by hurricane lamp in the blazing city, but they were censored, and did not appear in the paper. I'm afraid my scanning efforts have created the slanting lines but I can assure you these don't appear in the actual book...
I started asking questions and soon unearthed a mine of information. Hundreds of local people, including older colleagues on the newspaper remembered the two terrible nights in April 1942. One of them, Ron Shearn, had been commended for his brave work as an air raid warden. Others hid in shelters as terrified children. 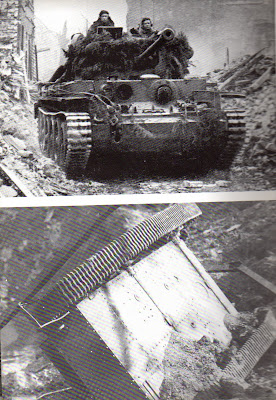 Gun mountings for Cromwell tanks were made by Stothert & Pitt engineers in Bath, whose works (lower picture) were damaged in the raids.
I learned about the causes. How tanks were made in this quiet backwater, and naval operations planned by the Admiralty, whose successor the Ministry of Defence still has major officers in Bath. How Harbutt’s Plasticine factory at Bathampton, famous for the craft toy it produced for generations of children, was mistaken by Nazi planners for a secret installation. And how Joseph Goebbels wrote in his diary after the raids: “There is talk about scenes like those in Coventry. That is the sort of music we like to hear.” 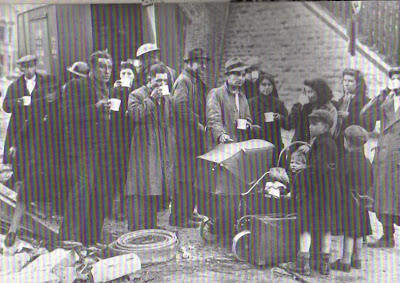 Tea, the unfailing British answer to a crisis is served up the morning after the first raid from a  YMCA canteen.

Digging further, I discovered how the Royal Air Force had bombed the historic German cities of Rostock and Lubeck earlier in the year, setting large parts of their ancient centres – full of the wooden houses of Hanseatic merchants – on fire. That led Hitler’s high command to order in revenge what became known as the ‘Baedecker Raids.’ They consulted Baedecker, the leading European guidebook of the day, and ordered the Luftwaffe to attack English cities which rated most highly. 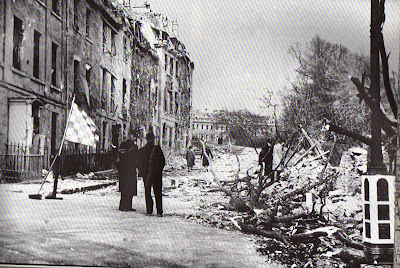 The scale of the damage is shown in this photograph of Lansdowne Place East, one of Bath's finest streets. The chequered flag marks a Civil Defence reporting point. Bath cognoscenti may notice something a little odd and unsettling about this picture which was kindly pointed out to me by Jim Warren, of the incomparable Bath Blitz Memorial website, linked above on the right. (Clue: .dnuor yaw gnorw eht s'ti ,nek ym dnoyeb snosaer lacinhcet roF) 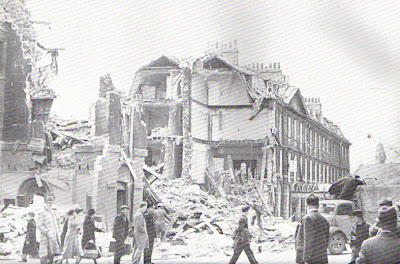 A small plaque on the restored Francis Hotel in Queen Square, which looked like this in 1942, is one of the handful of physical reminders of the devastation in the city today.
The result of my inquiries was this book, The Bath Blitz, first published in 1975, revised and expanded three times since then, and still selling well in the city. It has brought me friends and contacts from all over the world, either with their own stories to tell of the Bath Blitz, or astonished to hear of it, as I had been, and eager to find out more. Maybe you might like to join them.
Posted by MartinWainwright at 09:56 No comments:

On the telly, too 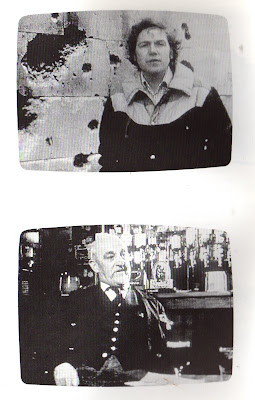 On the fortieth anniversary in 1982, I wrote and presented an ITV documentary on the tragedy, starting in Milk Street (top, above) complete with the dramatic shrapnel scars. This brought further unpublished information to light. In a new edition, the book included fresh details on the RAF’s attempts to prevent the raid and hunt down the bombers. Much of it was provided by retired Air Chief Marshal Sir Denis ‘Splinters’ Smallwood, who commanded a squadron of night fighters at Charmy Down, where the skeletal remains of the old base can still be found in fields off the A46. He made an excellent interviewee in the programme as did Ron Shearn, who was filmed in his favourite Bath pub (second picture, above). 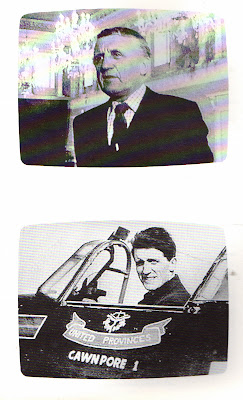 'Splinters' Smallwood in 1942 and 40 years later, filming in the restored Assembly Rooms.
Posted by MartinWainwright at 09:48 No comments: 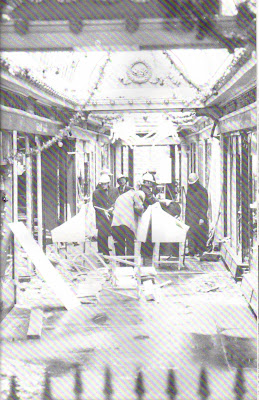 I also added a fresh chapter in a further new edition, on the curious IRA bomb attack on Bath in 1974, which caused no injuries but severely damaged the Corridor arcade. On the night in question, I had been to council meetings with the deputy news editor, John Donaldson, and was writing up reports with him in the office in Westgate Street. Although we were only a block away, we heard just a very slight ‘whump’ and felt an almost imperceptible shudder.

We were inclined to return to our typewriters but then the 'phones went mad. Such are the ways of blast and sound, that people in the valley from Widcombe to Limpley Stoke thought the world was coming to an end. It's all in the book, with pictures such as this one, courtesy of the Bath Chronicle, which were taken that night.

The ploy was counter-productive and hardened opinion against concessions in Northern Ireland - in much the same way as the Baedecker Raids did in 1942. The book includes some thoughtful passages on that subject from a woman in the countryside near Bath who kept a diary for Mass Observation - again, material which has not previously been published.

Posted by MartinWainwright at 09:42 No comments:

And now the nitty gritty (plus celeb angle)

The book is yours for a fiver, including packing and post. And that’s another story – the slightly unusual financing of my account of the Bath Blitz. One of its great claims to fame is that the first review of it was done in the Chronicle by a sub-editor friend. He is now better-known as Sir Terry Pratchett, creator of the wonderful Discworld stories, and so much else. 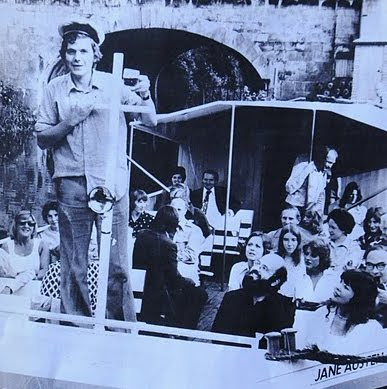 MW (standing) and TP (gazing raptly, with fierce beard) at M's leaving do from
the Chronicle. The situation is now, of course, reversed (apart from the beard).
Terry was complimentary but told readers that I would lose money on every copy sold, because I decided to charge only 45p, on the grounds that that was what my efforts were worth. The price has slowly risen as the book expanded, and I hope that I am not actually losing money these days. But I think you’ll find that you get a bargain, if you send off for a copy (or more…) by emailing me on martinswainwright@gmail.com. I’ll send off the order straight away and we can sort out payment after that. 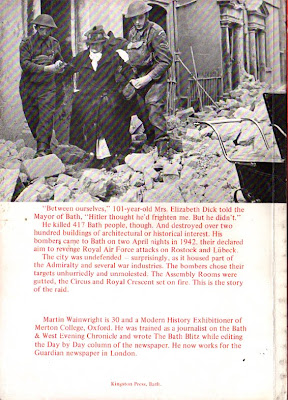 Posted by MartinWainwright at 09:16 No comments:

MartinWainwright
I'm third from left in front row of pic, and actually third from the right as well. ie in the middle.